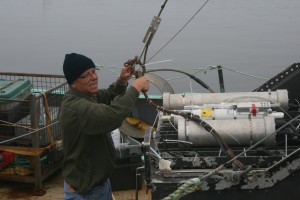 Taggart tinkering with the BIONESS – as usual.

Dr. C.T. Taggart, Retired Professor and Full Adjunct (FGS), fisheries oceanography, has been with the Oceanography Department at Dalhousie University since 1995. Prior to then he was a Research Scientist –II with the Northwest Atlantic Fisheries Centre in St. John’s, NL (1991-94); an Assistant Professor (NSERC-URF) in Oceanography at Dalhousie (1988-91); and an NSERC-PDF jointly with Dalhousie and the now defunct Marine Ecology Lab at the Bedford Institute of Oceanography (1986-88). He received his PhD (Dean’s Honours) in 1986 at McGill University (Dr. W.C. Leggett, Advisor) where he was an NSERC Scholar and McConnell Fellow and won the American Fisheries Society Student Award of Merit and the  1987 Canadian Society of Zoology T.W.M. Cameron Outstanding PhD Thesis Award. He received his MSc in 1980 at York University (Dr. D.J.  McQueen, Advisor) where he was an Ontario Graduate Scholar, and his BSc (1st Class Honours) at Carleton University (Dr. G. Merriam,  Advisor).

As a principal investigator in many small and large multi-institutional research initiatives, he conducts oceanographic research with undergraduate and graduate students, PDFs and RAs on physical, biochemical, genetic, ecological and human influences on growth, reproduction, early life history, recruitment, survival, population structure and the distribution of marine organisms. His study organisms range from zooplankton to fishes, sea turtles and whales in systems as small as the Bay of Fundy and as large as the Coral Sea. Over the last ~30 years he has mentored 13 PDF/Research Associates, 26 grad students, 22 honours students and ~50 research assistants and technical support staff. He has contributed to ~125 peer-reviewed publications (h-index=40, i10-index=100, ~7,000 citations), ~75 research reports and documents and >200 conference, workshop and seminar presentations of which ~30% have been either invited contributions or keynote addresses. His current research is focused on right whale conservation research in the NW Atlantic.